Sure, it’s a bit sad for me, but Jake’s been having these problems – memory lapses, confusion, headaches – and it’s time to say goodbye. Dr. Melissa Gold, a neurologist who treats Lassiter during office hours and spends humid nights with him in his Coconut Grove house, fears he may have chronic traumatic encephalopathy (CTE) as a result of all those concussions on the football field.

“The past clings to us like mud on rusty cleats,” Lassiter says, and it takes on new meaning in BUM LUCK, given his medical condition.

My first work of fiction – if you don’t count my legal briefs – was TO SPEAK FOR THE DEAD, published in 1990. The book, which has sold well over one million copies, introduced Jake Lassiter, who early on admitted, “They don’t call us sharks for our ability to swim.”

TO SPEAK FOR THE DEAD introduced Jake Lassiter, linebacker-turned lawyer.

Twelve more Jake Lassiter novels followed, including the ingeniously titled LASSITER, in which our hero hides a shameful secret from his past, LAST CHANCE LASSITER, a prequel that reveals how getting fired from his first job as a lawyer shaped the man, and now BUM DEAL, in which Lassiter confronts his own mortality. All thirteen titles are available free to Kindle Unlimited members. 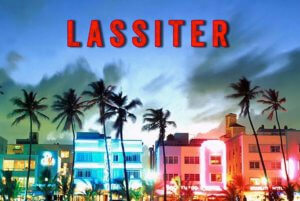 In last year’s book, BUM LUCK, Lassiter began showing symptoms consistent with a “precursor” to deadly CTE. I wrote about the issue in the blog item, “Why Does Jake Lassiter Want to Kill His Own Client?” Now, in BUM DEAL, facing an uncertain future, Jake undergoes experimental treatments for CTE, just as he makes a major change in his life, switching sides in the courtroom and prosecuting a surgeon accused of killing his wife. It’s a nearly impossible case with no forensic evidence, no witness, and no body. Complicating matters are Jake’s best friends-turned-antagonists, lawyers Steve Solomon and Victoria Lord, who defend the surgeon.

Drained of his mental edge just when he needs it most, my old courtroom warrior faces the possibility of losing the case – and his life – in court.

So…does Jake Lassiter win or lose the trial? Or more important, does he live or die? Hey, don’t ask! I’m keeping my trap shut, relying on attorney-client privilege, the Fifth Amendment, and my desire for you to enjoy the tale.

BUM DEAL is available in ebook, trade paperback, and audio.