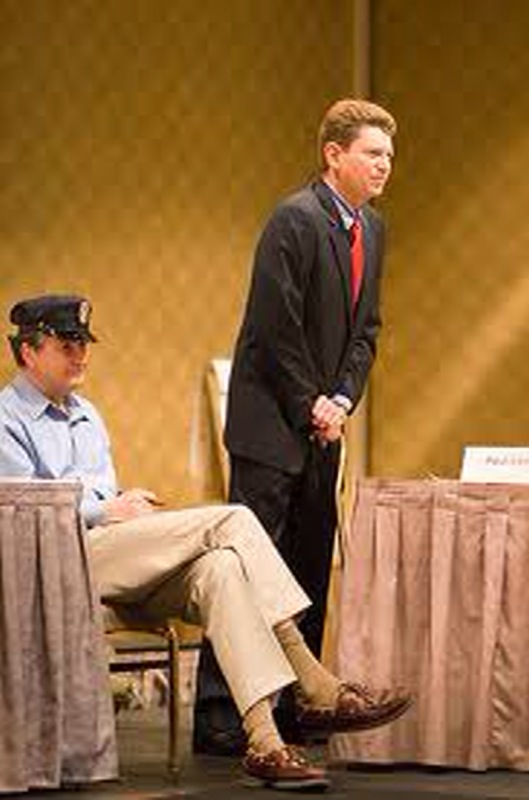 Using a cane after knee surgery, Paul defends best-selling author Lee Child on a murder charge at the first Thrillerfest.  (The jury hung.)

Paul shoves books off the desk at Forbes.

Paul with daughter Wendy Sachs at a joint book signing. Wendy is the author of “How She Really Does It: Secrets of Successful Stay-at-Work Moms.”

Daughter Wendy, her husband Michael, and children Jonah and Lexi.

Son Mike marries Aja Cole on the backlot at Paramount. No, it only looks like a fairytale setting. It’s really the classic Greencrest Manor in Battle Creek, MI.

Chip off the old Writer’s Block. Paul’s daughter, Wendy Sachs, author of “How She Really Does It: Secrets of Successful Stay-at-Work Moms.”

Paul, doing his best to appear scholarly and writerly… but still looking like a smart-aleck.

Paul on the balcony of the Miami-Dade County Courthouse. Overhead are courthouse vultures. No Lawyer jokes, please.

The author photo that never was. Hey, your books are set in Florida. Palm trees, alligators, mosquitoes. Lose the lariat, cowboy.

Faulkner wrote in the post office; Turow wrote on the train; Paul wrote in the morgue. Yes, the bodies are real.

California motorists along the Mexican border will recognize this sign. It helped inspire the book, “Illegal.

Paul tells James Carville his plans for saving the world. This was at a lawyers’ shindig in Punta Mita, Mexico where guest speaker (no kidding) Heidi Fleiss discussed the ills of the legal system

Paul and son Mike outside the “Paul J. Levine Reading Room” at Penn State. Lest you think the author shelled out the moolah for the room, nope. It’s the contribution of Paul’s pal Carmen Finestra, the famed television writer and wit.

Winners of the John D. MacDonald Fiction award: Elmore Leonard and Paul Levine. “I’m overwhelmed,” Paul said in his acceptance speech. “I haven’t been so surprised since I passed the Bar exam.”

“Ballistic” is Paul’s only novel without lawyers or courtrooms. It’s a “loose-nukes” thriller that imagines what might happen if a terrorist cult took over a nuclear missile silo.

One of Paul’s favorite views of downtown Miami and Biscayne Bay. This is the cover photo for the ebook edition of “Night Vision.”

In Germany, Paul’s “Solomon vs. Lord” novels are published under the name “Polly Levine,” at the request of the publisher who thought women readers would respond to a female author.

Paul’s first short-story anthology is a bestseller on Kindle. One story features Steve Solomon and Victoria Lord from the Edgar-nominated series of novels.

Paul makes Dave Barry laugh. The moment is frozen in time on the wall at Books & Books, Coral Gables, FL.

Paul’s first book signing. Trying hard to look like a writer, he wears all black in JULY in Miami!

Congrats to Penn State students for their tireless support of the Four Diamonds Fund, which funds treatment for kids with cancer at Hershey Children’s Hospital. Proceeds from “To Speak for the Dead” go to the charity.