Paul is also the author of 9 SCORPIONS, a tale of corruption at the Supreme Court. (The novel is currently titled IMPACT). That book inspired Paul to co-create (with Don Bellisario) FIRST MONDAY, the CBS TV series starring James Garner and Joe Mantegna as Supreme Court justices. The show was canceled after one season, despite Paul’s claim that it was a hit with disbarred lawyers, disgruntled litigants, and a demographic best described as “between Medicare and the mortuary.” 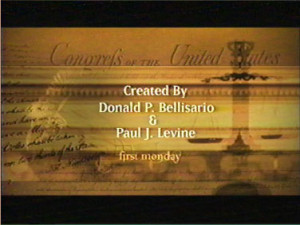 The “Created By” Credits for “First Monday”

JAG puts the author on a submarine and aircraft carrier.

Paul also wrote 20 episodes of the CBS military drama JAG, which gave him an opportunity to steer a nuclear submarine and land on the deck of an aircraft carrier, all without endangering national security. 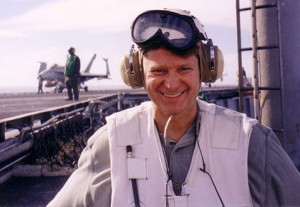 The Author…on the flight deck of an aircraft carrier.

Paul has written, with a self-deprecating tone, about beginning his Hollywood career on the JAG staff at the advanced age of 51. “Before I traveled west, I thought Hollywood writers rolled into work around 11 a.m., scribbled for a couple hours, drank their lunch at Musso and Frank’s, then cracked wise with starlets the rest of the day. Like Rick, who came to Casablanca for the waters, I was misinformed.” 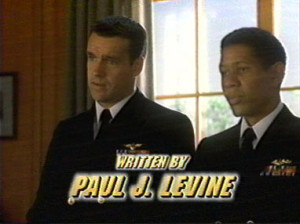 JAG was on the air for 10 seasons.

The full article about Paul’s experiences on JAG and FIRST MONDAY, “The Good, the Bad, & the Nutty: Mystery Writer Tackles Hollywood,” appears on the website here.  JAG is one of the select group of network dramas to have run for at least ten years and more than 220 episodes, according to Wikipedia.

More recently, CBS optioned SOLOMON vs. LORD and hired Paul to write the pilot. Alas, the series was not made.  Yet. 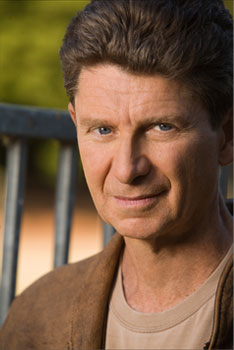