Paul  worked as a newspaper reporter, a law professor and a trial lawyer before becoming a full-time novelist. Obviously, he cannot hold a job. Paul claims that writing fiction comes naturally: he told whoppers for many years in his legal briefs.

His books have been translated into 23 languages, none of which he can read.  In Germany, his first novel, “TO SPEAK FOR THE DEAD,” has recently been published as “In Vertretung Der Toten.” 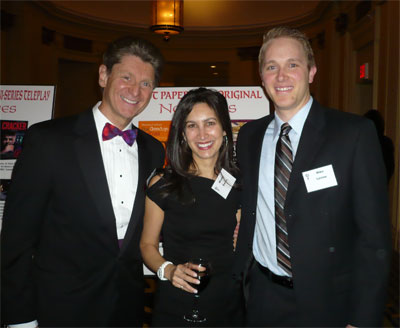 Paul with daughter Wendy and son Michael at the Edgar Allan Poe Awards, 2007

Paul is an admirer of the works of John Updike, particularly the “Rabbit, Run” trilogy.  “Anatomy of a Murder” by John Voelker (writing as Robert Traver) is his favorite legal thriller. Levine’s writing style has been likened to that of John D. MacDonald, Carl Hiaasen, and Elmore Leonard.

Along the same lines, reviewer Joe Meyers of the Connecticut Post wrote: “It’s not a coincidence that after Elmore Leonard received the first John D. MacDonald Fiction Award, the second year’s prize went to Levine.”

Paul Levine and Elmore Leonard with their literary prizes.