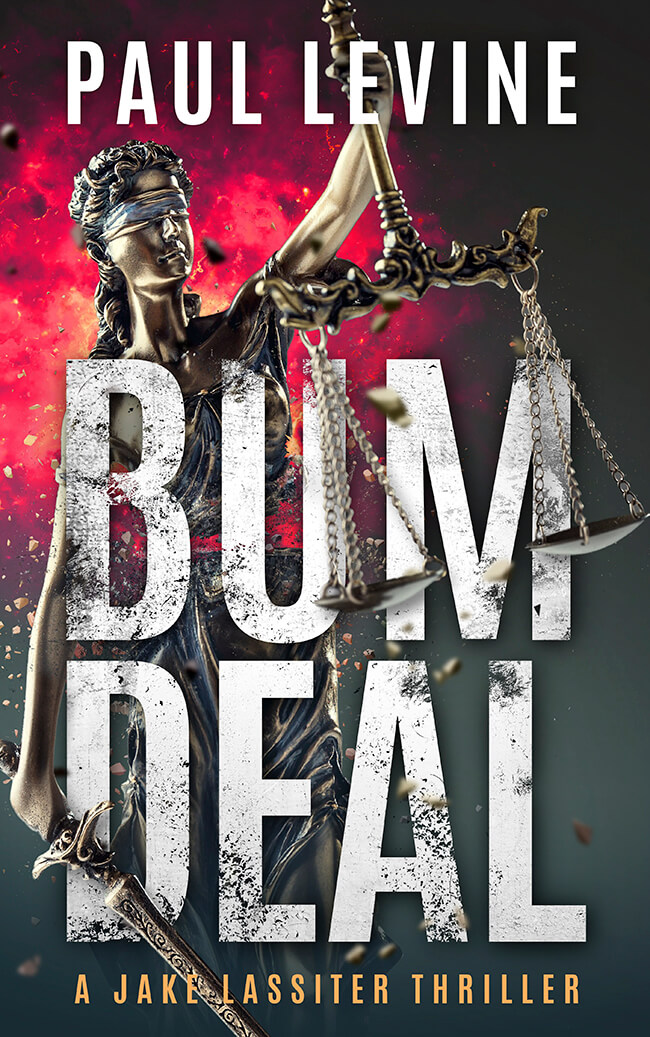 “They don’t call us sharks for our ability to swim.” —Jake Lassiter

But Lassiter’s used to fighting impossible battles on the gridiron and in court. After all, he’s not totally burned-out—just a little scorched.

Standing in Lassiter’s way are the defense lawyers: slick-talking Steve Solomon and blueblood Victoria Lord, who would love to beat their old mentor in court. Not to mention the specter of CTE, the lethal brain disease Lassiter may have contracted banging heads in the NFL. Drained of his mental edge just when he needs it most, Lassiter faces the possibility of losing the case—and his life—in court.

“Any book with Jake Lassiter is a drop-everything, read-it-now for me—and this one has Solomon & Lord too. ‘Bum Deal’ is fantastic.” —Lee Child, #1 bestselling author of the Jack Reacher series

“’Bum Deal’ is the real deal. Jake Lassiter at his smart-talking, fast-thinking best. A funny, compelling and canny courtroom thriller, seasoned with a little melancholy and a lot of inside knowledge.” —Scott Turow, #1 New York Times bestselling author

“The ending is perfect: a nudge in the ribs that doesn’t sell out the novel’s sinister edge. This is a triumph of mood and tone as well as plotting.” —Booklist

“Jake Lassiter is up against his greatest challenge—an incurable, brain-wasting disease that threatens to rob him of his brilliant, legal mind when he needs it the most. It’s an astonishing, bittersweet, and daring gamble, but those are the qualities that have always set Levine and Lassiter apart from the pack.” —Lee Goldberg, #1 New York Times bestselling author

“Jake Lassiter for the prosecution? What will Paul Levine think of next? How about a brilliant doctor who just happens to be a murderous psychopath? How about Solomon & Lord for the defense? How about the jackhammer headaches that may have scrambled his brain once too often? It’s all there as Levine connects the funny bone to the heart in the pulse-pounding Bum Deal.” —John Schulian, PEN/ESPN Lifetime Achievement Award winner

The surgeon laced his fingers and cracked his knuckles, a concert pianist preparing to tackle Tchaikovsky. “I could strangle you with one hand, sweetheart.” His voice soft and seductive.

“You’re pathetic.” She spat out the words. “Worms have more backbone.”

He wrapped his right hand around her neck, just below the chin. “I’ll shatter your hyoid bone, watch your eyes pop.”

A low growl came from his throat. “I’ll laugh as your tongue shoots out of your filthy mouth. You’ll look like a dead raccoon. Roadkill!”

“How many men have I screwed since we’ve been married? Take a guess, Dr. Worm.”

Puzzled, he studied her. Same pouty lips, same dark eyes glistening like hot lava. But the insults? This was something new.

“Or just count them on your fingers,” she taunted him. “Whoops! You’ll need your toes, too.”

He blinked. “What’s this? A twist in the game?”

“Every man better than you.”

His fingers found her carotid artery. He tightened his grip, and a wet noise like the growl of a small dog caught in her throat. His left hand shot forward, and now both hands encircled her neck.

“Getting excited, worm? Going to . . . ?” A guttural sound choked off the words.

He was becoming aroused, as he figured she wanted. He eased the pressure, let her grab a greedy breath, then squeezed again. Pink streaks colored her cheeks like a sunset over the Gulf.

“You look lovely, sweetheart,” he said. “No need for blush today.”

A gurgle came from her throat.

She lost consciousness, her eyes rolling back in her head.

It had happened once before. He had used simple CPR—chest compressions and mouth-to-mouth—to revive her. Afterward, her ribs were sore, and bruises the color of eggplants kept her from nude sunbathing for a week.

He scooped her up and tossed her onto the bed. A 107-pound rag doll. What was that crap about other men? She’d never said anything like that before. It broke the rules—wasn’t part of the game. Why was she trying to provoke him?

He examined her neck. Red-and-purple striations. She would be furious tomorrow.

If tomorrow ever came.

THE SUNNY SIDE OF JUSTICE

When my cell phone rang, I figured someone was dead.

Nah, I don’t have ESP. I have caller ID.

State Attorney Raymond Pincher on the line. That could mean several things, many involving a corpse. Maybe a client of mine, out on bail, was machine-gunning tourists in the Fontainebleau lobby. That’s one of my recurring nightmares.

Civilians think that criminal defense lawyers are cold-blooded mercenaries, carrying our spears into battle for killers, con men, and crooks of every stripe. But we get the night sweats over the consequences of our actions. Or at least I do.

“Jake Lassiter, you damn fool!” Pincher greeted me. “What the hell’s wrong with you?”

“Where oh where should I begin, Ray?”

We’d been friendly antagonists for years, sparring in court and in the boxing ring at the Riverfront Athletic Club. But no more fisticuffs for me. For the last year, I’ve been under doctors’ orders to avoid blows to the head. Too many concussions going back to my playing days at Penn State, where I was a starting linebacker, and with the Miami Dolphins, where I was an unguided missile on the suicide squads when I wasn’t warming the bench.

“Phil Flury intends to file a Bar complaint against you,” Pincher said.

I leaned back in my chair and admired the view of a placid Biscayne Bay in the fading light. I was drinking solo on the patio at the Red Fish Grill at Matheson Hammock, a couple miles south of my Coconut Grove home. An easterly breeze kicked up sand from the beach and ruffled the palm trees a few feet from my table.

I was sipping tequila, Don Julio 1942, and I could feel the warm Mexican sun in my belly, but Pincher was fast becoming Mr. Buzzkill.

“You punched Flury!” he thundered. “You can’t strike an assistant state attorney, Jake. It’s a felony.”

“I only poked him with my index finger to make a point.”

My pals Steve Solomon and Victoria Lord were supposed to join me for dinner but, as usual, were late. They had something important to tell me, had even offered to treat me to pan-fried snapper. I assumed the deal also included some top-shelf tequila.

“He withheld a witness statement favorable to my client.”

“Lying prick!” I must have raised my voice, because an elderly couple at a nearby table shot me dirty looks. “Flury violated Brady versus Maryland. Ever hear of it, Ray?”

At the other end of the line, Pincher sighed, then said, “You still undergoing treatment?”

Deflect and evade. So much simpler than describing all those medical tests and illnesses with unpronounceable names.

“I never thought you had brain damage,” Pincher said.

“Excellent news. I’ll fire my doctors and cancel my therapy.”

“Those symptoms of yours. Irritability. Irrational behavior. Unprovoked anger. That’s not CTE. You’re burned-out—that’s all. You need a change of scenery.”

I sipped at the tequila. Rich and smooth, liquid gold. Maybe a hint of licorice in the agave. “Burned-out, sure. I’ve been toting my briefcase from courtroom to courtroom for more than twenty years. Who wouldn’t be a little scorched around the edges?”

“Only because you’ve been on the wrong side too long.”

“Not my fault most of my clients are guilty.”

“That sad old song of the defense bar.”

“If our clients knew our real winning percentage, they’d jump bail and flee to Argentina.”

“Maybe it’s time to do something about it.”

“What? Only represent innocent clients? I’d starve. Sure, I’d prefer a cause that’s just, a client I like, and a check that doesn’t bounce. But these days, I’m happy with a client who doesn’t steal the potted ferns in my waiting room.”

Strands of miniature white lights wrapped around the palm trees blinked on. The sun was setting behind me, the horizon tinted the reddish gold of a ripe peach.

“Tell me something, Jake,” Pincher said. “Is there any defendant you won’t represent?”

“Only those my granny calls bottom-feeding gutter rats. Men who abuse children or women.”

“In those cases, you’d rather be on the sunny side of justice—wouldn’t you, Jake?”

“Sorry to break it to you, Ray, but the criminal justice system is nothing but dark nights and dangerous alleys.”

“Not on my side of the street. I represent the people of the great state of Florida.”

“You may not realize it, Jake, but you’re a natural-born prosecutor.”

I laughed and nearly spilled my drink. “The hell I am. My heart’s with the little guy, not the behemoth of the state.”

“Really?” He chuckled at the other end of the line. “Do you believe in the fundamental goodness of humanity?”

“After serving purgatory in the so-called Justice Building, how could I?”

“Exactly! You know the evil that lurks in men’s hearts. You’ve seen it, as I have. You know how many nights I’ve sat at my desk with a bottle of bourbon and a stack of murder scene photos?”

“Who are we talking about here, Ray? You or me?”

“Both of us, but you’re the one perched on the precipice. One faulty step, you’ll plunge into the abyss.”

“I’m offering you wings to fly away.”

“Meaning what? When you called, I thought someone was dead.”

“I want you to prosecute her husband.”

Order Bum Deal in e-book, paperback or audio at: