The debate over dropping the atomic bomb on Hiroshima — just how many American lives did it save? — has always been more personal than numerical to me. The devastating attack surely saved my father’s life, no small consequence to someone born three years later. 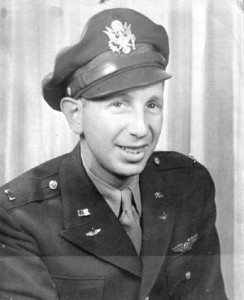 On August 16, 1945, ten days after a fat torpedo of a bomb nicknamed Little Boy incinerated the city of Hiroshima, my father walked through the rubble with a Japanese military police captain who served as both captor and tour guide. Lt. Stanley Levine and his nine B-29 crew mates, shot down a week earlier, were quite likely the first Americans to witness the destruction.

Hiroshima was a world away from the tiny borough of Hughesville, Pa., where my father and I were both raised. As a small child, I watched with pride as my father, his snug dress uniform decked with medals, led the Memorial Day parade of war veterans past our house on Main Street. The townspeople all knew his story, how he had walked in the first shadow of the atomic age.

Prior to the atomic bomb attack, Stan Levine, a lanky 26-year-old radar officer on a B-29 Superfortress, had flown 16 missions over Japan, all uneventful, unless you count the aircraft flipping over and losing an engine in a thermal current caused by incendiary bombs. In July, his best friend, Dick Hughes, a radar officer on another crew, was killed by cannon fire from a Japanese Zero. “I went up to Iwo Jima to help fly the plane back to Tinian,” he recalls. “The radar room was all shot up, and on the floor, I found Dick’s bloody belt buckle.”

On August 6, the Enola Gay dropped its uranium-235 bomb on Hiroshima with the force of 20,000 tons of TNT. Two days later, my father’s crew, flying the Nip Clipper, took off for a daylight raid on the industrial city of Yawata. “We’d all heard about Tibbets’ plane dropping some new bomb, but nobody considered it a big deal,” he said. “The war was still on. We had a mission to fly.”

With luck, they would return sixteen hours later. Instead, trouble started shortly after they released their bombs. “The bomb bay was stuck open, so the bombardier goes down there with a long hook trying to close it manually. I was afraid he’d fall out. Then, pop! I look out the right side blister window and we’re hit by a burst of flak right behind the number four engine.”

With the wing ablaze, the bomber lumbered along for another ten minutes, vainly heading toward the emergency airfield at Okinawa. The pilot threw the plane into a dive, hoping to put out the flames, which instead, flared even brighter. With black smoke engulfing the fuselage and the risk of explosion increasing by the second, the pilot gave the order to bail out.

At eight hundred feet above the water, Stan Levine was the next-to-last to jump. His parachute took two pendulum swings before his feet hit the water, hard. The pilot, Lt. George Keller, followed, but his chute never opened, and he was killed. The men, spread over three miles, swam toward their mid-point, my father dragging along the engineer who could not swim.

The next morning, as the downed crew floated north in the Sea of Japan, they saw search planes, futilely circling the area where they crashed. That same day, the B-29, Bock’s Car, dropped an implosion plutonium-239 bomb on Nagasaki.

The men drifted for a week, sharing eight one-man rafts, subsisting on one piece of hard candy and three sips of water a day per man. On August 14, they were picked up by Japanese fishermen less than a mile offshore the island of Honshu. One of the fishermen drew “B-29” on his palm as a question, and a crewman foolishly nodded. Hostile local villagers taunted and beat the men that night. At dawn, military personnel took over and forced the crew to walk, blindfolded and barefoot, along a rocky coastal path to an army camp a few miles away.

“Under the blindfold, I could see a chopping block with a basket and a soldier with a long curved sword,” my father said, recounting the events of 50 years ago. “At reveille formation, they were going to chop off our heads. I was just hoping the pain would be over fast.”

Executing B-29 crews pre-dated the attack on Hiroshima. The men who flew the world’s largest aircraft were hated for their incendiary bombings of civilian targets. Indeed, the 11,600 bombing sorties flown by B-29’s during ten days in March killed roughly the same number of people as the two atomic bombs, perhaps 180,000.

I asked my father if he ever felt guilty about firebombing civilian targets. “Hell no! Did they feel guilty for Pearl Harbor or the Bataan Death March or the way they treated civilians when things were going their way?”

As the first crew member was just moments away from beheading, a military police lieutenant drove up in a jeep, shouting excitedly. “Just like in the movies, he had a written order from a general giving him custody of us.”

Just as in the movies, too, he spoke English. Lt. Nobuichi Fukui had visited friends at Dartmouth before the war and had converted to Christianity, he later told my father. Realizing that the atomic bomb had effectively ended the war, he was protecting American POW’s from further retaliation. With several MP’s, Capt. Fukui (nicknamed “Tank” by the Americans for his squat build), transported the men to a railroad station. People there paid less attention to the POWs than to a speech being broadcast over loudspeakers. Later, my father learned that he and his crew mates had heard — but had not understood — Emperor Hirohito breaking imperial silence by announcing Japan’s impending surrender.

Fukui provided the men with a doctor and gave them a bottle of whiskey and a bowl of tangerines. After one night in a jail cell in a location my father cannot pinpoint, the crew was taken through Hiroshima on August 16. They saw the devastation from the back of a truck. The expanse of flattened concrete and twisted metal rendered them speechless. “‘One bomb,’ Fukui kept saying, shaking his head. ‘One bomb.'”

On a credenza in my study is a yellowed, crumbling letter datelined “September 8, Hiroshima POW Camp 1.” Typed on the back of a U.S. Army news release (“Japs Move >From Singapore”), the letter was the first word my mother received of Dad’s liberation.

“And when I get home, darling, I’ll tell you how your husband went through the atomized ruins of Hiroshima ten days after the bomb. Except for an occasional wall or chimney, and the skeleton of a building, the city was flattened. Just rubble as far as I could see, nothing but destruction to the horizon. Absolute quiet and no living thing except a stray dog wandering in the ruins. That night, we tried to take care of two Navy fliers, Neal and Brissette, who had been shot down and were imprisoned in Hiroshima. They were badly burned with horrible green stuff coming out their mouths and their ears bleeding. We gave them all the morphine we had, but their pain was so bad they begged us to kill them. They died in our arms the next morning. Seeing the effects of atomic war would make it pretty easy to become a pacifist.”

Fifty years later, Stan Levine is a staunch defender of the decision to drop the bomb. “It saved thousands of American lives, and even more Japanese,” he insists. “An invasion would have been horrible.”

Today, only my father and three crew mates are still alive. Nobuichi Fukui, who foresaw better times when he rescued ten terrified American fliers from execution, became a successful corporate executive in Tokyo. My father corresponded with him until Fukui’s death 20 years ago. In virtually every letter, they promised to visit each other. Neither ever did.