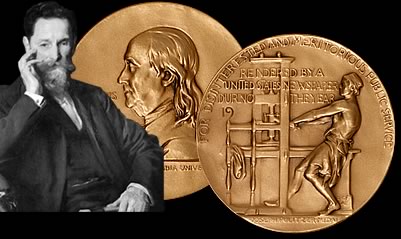 The 2014 Pulitzer Prizes were announced today, and I’m trying to take a nuanced approach…but I’m getting angry.

The Washington Post and the Guardian U.S. shared the public service award for their publication and analysis of documents revealing the National Security Agency’s global surveillance program. The stories were, of course, based on documents stolen by megalomaniac and international fugitive Edward Snowden. (Note I prefer the word “stolen” to “leaked.”)

Meanwhile, Snowden, sipping vodka and eating blinis with his Russian caretakers, had this to say, according to the Guardian: “Today’s decision is a vindication for everyone who believes that the public has a role in government.”

No, it doesn’t, Eddie. It’s a vindication for sneaky little rats who violate federal law, claiming higher principles, then flee into the arms of that great protector of liberties, Vladimir Putin.  I would have more respect for Snowden if he had stayed and faced the music, i.e., if he had marched  into the F.B.I. and surrendered. (This is what Daniel Ellsberg did.  More on that later).

Eddie, tell your story to a jury, you little punk, then do your time like a man. But no, you fled like…well, a fleeing felon.

As for the Pulitzer Prize itself, I have mixed emotions.  The Post reported that it had a team of 28 journalists working on the stories. Frankly, in these times, I’m happy any newsroom still has more than two dozen working journalists. I hate the fact that Snowden can now claim vindication for his illegal acts. But bear with me now. I cannot say with certainty that The Washington Post didn’t deserve the Pulitzer Prize. That also goes for the damned Guardian, which keeps referring to Snowden as a “whistleblower,” rather than my preferred terms of “thief,” “rat bastard” or “traitor.” 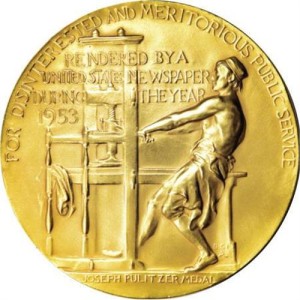 The Pulitzer Prize Board stated that the award was being given for:

“the revelation of widespread secret surveillance by the National Security Agency, marked by authoritative and insightful reports that helped the public understand how the disclosures fit into the larger framework of national security.”

I believe there should be a robust debate over the scope of surveillance by the government, but by lawful means.

Memories of the 1972 Pulitzer Prize

All of this brings back memories.  In 1972, The New York Times won the Pulitzer Prize for its series on the “Pentagon Papers.” For those too young to remember, the Papers were a study of governmental decision-making during the Vietnam War and were a major embarrassment to the Nixon Administration. The leaker, military analyst Daniel Ellsberg, did not flee to China or North Vietnam. He surrendered voluntarily and faced trial for violating the Espionage Act.  Upon turning himself in, according to Wikipedia, he stated:

“I felt that as an American citizen, as a responsible citizen, I could no longer cooperate in concealing this information from the American public. I did this clearly at my own jeopardy and I am prepared to answer to all the consequences of this decision.”

Due to “gross governmental misconduct” in the gathering of evidence against Ellsberg who faced up to 115 years in prison, all charges were dismissed. (The misconduct, approved by Nixon’s right-hand man John Ehrlichman, included the infamous break-in of the office of Ellsberg’s psychiatrist by the crew that would later gain greater notoriety as the Watergate burglars).

Bravo for Ellsberg, who bravely stood his ground. And do svidaniya Snowden, as they say in Moscow. Goodbye, coward.

The complete list of the 2014 Pulitzer Prizes, from the History award (Alan Taylor’s “The Internal Enemy: Slavery and War in Virginia, 1772-1832″) to Poetry (Vijay Seshadri’s “3 Sections”) can be found here.