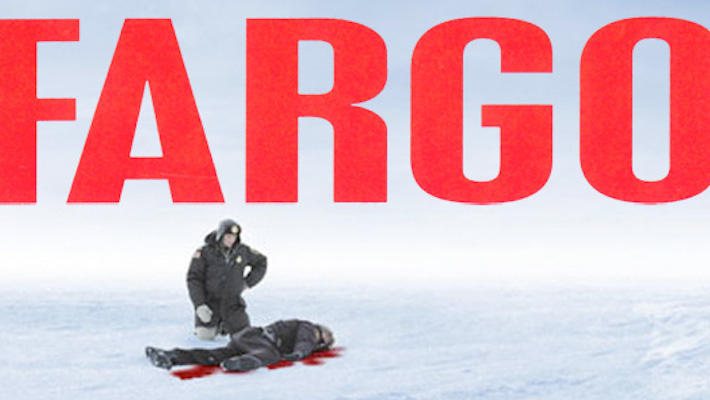 The ten-episode Fargo TV Series, based loosely on the Coen Brothers darkly comedic feature film, went out with a bang — several bangs — and fans can finally let out a deep breath.

PAT MYSELF ON THE BACK ALERT:  Several episodes ago, I told my wife Marcia that meek cop-turned-mailman Gus Grimly, not protagonist Deputy Molly Solverson, would kill Malvo. Dramatically, it  had to happen that way. More on why below.

Well, where to begin? The Fargo TV series was many things. On the surface it’s a serial killer story with the usual question: Will justice be done? But that’s the issue in virtually every cop show in the history of television.

Just as “True Detective” (another many-layered serial killer story) was deeply rooted in the psychological traumas of the two main characters, much was going on beneath the surface in the Fargo TV series:

* It’s a father-daughter story. Two stories, really. Lou (Keith Carradine), the retired and wounded cop, fears for his daughter Molly, (Allison Tolman), the deputy-who-should-be-chief. And widower Gus Grimly (Colin Hanks) fears that if he’s killed, his daughter will be an orphan.

* It’s a story of two sociopaths, though one doesn’t know it in the beginning.

* It’s a story of two cowards, but one really isn’t.

* It’s a story of redemption for the coward who was really a hero.

* But most of all, it’s a story about a very smart female cop whose talents are ignored by her donut-chomping male superiors until the very end, where she prevails, just as the former chief had foreshadowed.

Fargo TV Series: In the Beginning, a Shocker!

Let’s go back to the beginning. All is well with the world in little Bemidji, MN. Vern, the nice guy police chief, recognizes Molly’s superior intelligence and dedication and expresses the hope that she’ll be the next chief. Then, BOOM! Hit man Malvo kills Vern in a scene of shocking violence.

That shooting came hard-on-the-heels of Malvo killing the town bully in a whorehouse, and meek insurance salesman Lester Nygaard (the incomparable Martin Freeman) splattering his wife’s brains with hammer.  A true coward, Lester has learned from Malvo that having no conscience can get things done. You can kill your nagging wife, frame your irritating brother, lie to the widow of the town bully and have sex with her, then finally set up your second wife to take a bullet intended for you. All with hardly a second thought. It was Malvo who brought out Lester’s sociopathic tendencies, though I suppose there was always an underlying narcissism.

Midway through the season, we discover we have a co-protagonist. It’s widower-cop Gus Grimly, who takes a shine to Molly, marries her, and gets her pregnant. But there’s a “ghost” looming over him, to use the screenwriting term. Early on, he freezes up and lets the murderous Malvo go, after stopping him for speeding. But if you recall, it was Gus’s fear of leaving his daughter an orphan — not cowardice — that prompted Gus’s action…or inaction. Still, that left Gus despondent, and after a second screw-up, accidentally shooting Molly in a white-out blizzard, he’s canned from the force. Now he can pursue his real dream…becoming a mailman. No, really.

Gus might not be cut out to be a cop, but neither is he a coward. In the finale, he sneaks into Malvo’s hidden cottage to await his return. Logically, Gus should have called the cops, right? Wrong! As wife Marcia pointed out while we were watching the show, Gus knew that his wife, the pregnant Deputy Molly, would rush to the scene, directly into harm’s way.  Gus was protecting her with his seemingly illogical action.

Another reason, too. Let’s go back to film school (a place I’ve never been). In screenwriting, they talk about a character’s “desires” versus a character’s “needs.” On the surface, Gus desires a peaceful life. A family. A pleasant drive through the countryside delivering the mail. But his “need” is interior, perhaps even unconscious. He needs to prove to himself that he is not a coward. He needs to protect his wife and daughter. (In this regard, he is just like Molly’s father Lou, who sits on the porch all night with a shotgun to protect Gus’s daughter from harm). In short, Gus needs redemption. That’s why it was clear to me, early on, that Gus will kill Malvo. And boy, was it satisfying! Seldom is a shooting in cold blood so damn well earned.

Hey, speaking about redemption, let’s say a word about the knucklehead police chief Bill (Bob Odenkirk), who, as another observer pointed out, is “not the sharpest blade in the woodchipper.” He gains redemption by recognizing his weaknesses and Molly’s strengths and retiring so she can become chief. In an unusually introspective moment, he admits to not being up to the job in an era of cruelty and inhumanity:

“I used to have positive opinions about people. Used to think the best. Now looking over my shoulder — an unquiet mind — that’s what the wife calls it. The job has got me staring into the fireplace, drinking. I never wanted to be the type thinking about the nature of things. All I ever wanted was a stack of pancakes and a V-8.”

I think that was intended to pay homage to the Coen Brothers’ “No Country for Old Men,” where Sheriff Tommy Lee Jones  bemoans the passing of simpler times. Here’s a truncated version of that monologue:

“I was sheriff of this county when I was twenty-five years old. Hard to believe. My grandfather was a lawman; father too. Me and him was sheriffs at the same time; him up in Plano and me out here…Some of the old time sheriffs never even wore a gun. A lotta folks find that hard to believe…The crime you see now, it’s hard to even take its measure. It’s not that I’m afraid of it. I always knew you had to be willing to die to even do this job. But, I don’t want to push my chips forward and go out and meet something I don’t understand.”

Sharp observers might remember a couple weeks back, Malvo told the story about the bear who chewed his leg off to get out of a trap, then died in a stream, but on his own terms. Then Malvo gets his leg broken in Lester’s bear trap…leading to his own death at Gus’s hands. No biggie. Just the screenwriter showing off a bit.

Finally, there is the wonderful ending of the Fargo TV series. On a comfy sofa, preganant Molly, Gus and Gus’s daughter Greta are watching television. Gus is a tad embarrassed that he’s getting a citation for bravery for taking down Malvo. Says he thinks Molly should get it. “Nope,” she says, “that’s your deal. I get to be the chief.”

(Paul Levine is the author of the “Jake Lassiter” and the “Solomon vs. Lord” series of legal thrillers).