(Author Interviews Note by Paul Levine: The closest I ever got to Harvard was in 1973 when its law school offered me admission to its LL.M. program. I was just about to graduate from the University of Miami Law School and thought I wanted to be a professor. Oh, that was a long time ago! Anyway, I was a new father and needed a paying job, not more tuition, so I reluctantly said “no thanks.” This week I sat down with Mary Yuhas of The Harvard Square who grilled me with questions, both literary and personal. (Hemingway was unavailable). This is adapted from her article, which appeared February 12, 2014).

The author of 18 novels, Paul Levine won the John D. MacDonald fiction award and was nominated for the Edgar, Macavity, International Thriller, and James Thurber prizes. A former trial lawyer, he also wrote more than 20 episodes of the CBS military drama “JAG” and co-created the Supreme Court drama “First Monday” starring James Garner and Joe Mantegna. The critically acclaimed international bestseller To Speak for the Dead featuring Jake Lassiter was his first novel. Levine is also the author of the Solomon vs. Lord series and the thrillers Illegal, Ballistic, Impact, and Paydirt. His most recent novel is State vs. Lassiter. He is a graduate of Penn State University and the University of Miami Law School.  More information on his website.

Author Interviews: The Q & A

H.S.: How did you begin your writing career?

Paul: I blame windsurfing. I was on vacation in Maui and got injured windsurfing off the North Shore. It was hard to walk so for two weeks. I had nothing to do but lie on the beach. I had a pen and a yellow legal pad, which was useful because, at the time, I was a lawyer. I was thinking about a case of mine in which an old man’s busty secretary set up the theft of $2 million in negotiable bonds from his home office. In real life, the story was fairly boring. I got the bonds back; no one went to jail, but I saw possibilities for fiction…involving windsurfing.

H.S.: So you started writing in longhand on a legal pad?

Paul: This was a long time ago.  A “laptop” was a dance in a strip club.  Anyway, I scribbled one sentence on the legal pad: “The old man loved money, gadgets, and large-breasted women, and at the moment, he had all three.” It’s the first line of fiction I ever wrote unless you count all the legal briefs I filed over the years. The sentence got me started. It opens chapter one of Riptide, one of the Jake Lassiter series. 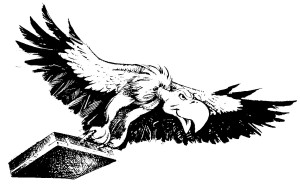 Paul’s image of himself hurrying to court as a young, nasty lawyer

H.S.: Your novels “often have a sly, sardonic tone,” according to Wikipedia.

Paul: They’re one to talk.

H.S.: Seriously, you often write about murder trials, and yet you often bring humor into play.

Paul: As Jake Lassiter points out, there’s a hilarious sign in every courtroom in Miami: “We Who Labor Here Seek Only Truth.” Then there’s Steve Solomon who makes up his own rules: “When the law doesn’t work…work the law.” Let’s just say that, having tried cases for 17 years, I have a healthy skepticism about what Lassiter terms the “so-called justice system.” 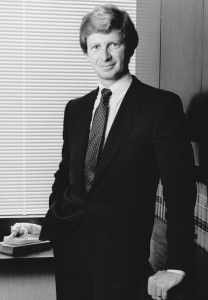 As a young trial lawyer, the author tries to look older and wiser. As an older man, he attempts to look younger and hipper.

H.S.: If you were starting out today, would you look for an agent or publish via an e-book?

Paul: I would definitely try the traditional approach of a getting an agent and a legacy publisher. Self-publishing a single work without a backlist is very, very difficult. How many ebooks are out there? Five million? Six million? More? How do you get noticed? The optimum way is the old hardcover/paperback deal. Or trade paperback by a recognized publisher.

H.S. Did you ever have doubts about your writing ability, especially after harsh criticism or literary agent rejections? How did you handle it and what do you suggest to others?

Paul: I am filled with self-doubt! I am always surprised when a story works, or dialogue zings, or a character becomes real. I wrote two books on spec that never sold to publishers. Yes, that hurt. I also now see the weaknesses in those books. I also wrote many spec features that didn’t sell to Hollywood and wrote TV pilots (both hired by the networks and on spec) that didn’t were never made. There should be an equation. Writing equals Rejection Squared. Advice? Handle it! Persevere. Don’t whine. Put your butt in the chair and write!

Paul: Impatience, which causes poor writing. With beginning writers, there’s a tendency to think you’re done when you’ve finished with your first or second draft. Unless you are a genius, which I’m not, you’ve just reached second base. To score a run, you’ve got to rewrite and rewrite. Hemingway said, “all good writing is rewriting.” Take his advice. Rewrite and polish. 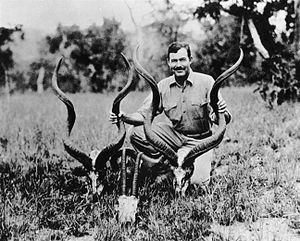 H.S.: Any other tips for first-time-authors?

Paul: Read good authors in a field you enjoy. But DON’T copy their style. There’s nothing worse than a faux Elmore Leonard. Read books about story structure and writing novels. There are really too many to recommend, but Stephen King’s book On Writing comes to mind. And, of course, write!

H.S.: Is it easier or harder to get into writing today than when you started?

Paul: It’s harder to break into traditional publishing than when I started in the 1980s with Bantam because there are fewer major publishers. There has been some growth in smaller, independent presses, which is good, but the flip side is that the amount of the advance is generally less. But then, there is the new world of self-publishing on the internet with Amazon and its competitors. Nothing wrong with that, but there seems to be a myth that self-publishing ebooks is an easy way to riches and fame. That’s not the case.

H.S.: Author Interviews wants to know: how long does it take you to write a book?

Paul: From idea to concept to research to outline to writing and revisions, it takes me nine months to a year for most of the series books. I already have my protagonist and his world in my head. I don’t need to drive to the courthouse to see what a courtroom looks like. For standalones, such as Illegal, it took closer to a year and 1/2 to two years Part of the book is written from the point of view of a young Mexican woman and part from her 12-year-old son’s POV. I was terrified I could not write in the voice of a 30-year-old female illegal alien. In the end, I believe it turned out well.

H.S.: How did you break into writing TV screenwriting?

Paul: I became friends with fellow Penn State grad Don Bellisario, the creator of “Magnum, P.I.,” “Quantum Leap,” and “JAG,” among others. He enjoyed my books, and I enjoyed his shows. When he wrote the two-hour pilot of “JAG,” he shared it with me. I told him I liked it very much, but did television really want a show about Navy lawyers? (What did I know! The show ran 10 years and about 220 episodes). Anyway, in the third season, Don asked if I wanted to write a script as a free-lancer. I’d written a couple of TV pilots that hadn’t gone anywhere, and I thought I understood the voice of the show and could write those characters, so I did it, and the episode aired pretty much the way I wrote it.

The television writer gets immediate gratification (or sorrow). It’s just weeks from script to air.

The next year, I freelanced another script for “JAG,” and the year after that, Don asked me to move to Los Angeles and work full-time on the show. Initially, I didn’t want to do it. But I had just written one of those spec novels that didn’t sell. So I took the job, which frankly paid WAY more money that I expected. And the Writers Guild has a helluva health plan and a pension plan, something book authors don’t get. Of course, occasionally you have to stop working and hit the picket lines.  I’m a big believer in unions, by the way. Without Hollywood unions, there’d be no royalties, pensions, or health plans. 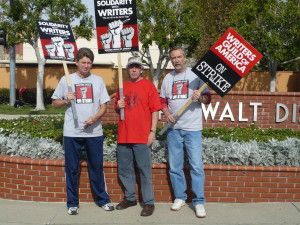 The author with fellow scribblers Larry Moskowitz and Randy Anderson bring Disney to its knees during the 2007 strike.

In my second season on the show, I took an idea to Don for a drama set at the Supreme Court, focusing on the interactions between the justices and the law clerks. (It was loosely based on my Supreme Court thriller, Impact.) Don liked it; Les Moonves at CBS liked it; and it became the short-lived “First Monday.” Don and I co-wrote the pilot, which starred James Garner, Joe Mantegna, and Charles Durning and folded after 13 episodes, with some of the oldest demographics in the history of television. Or as I like to say, we were a hit with the crowd between Medicare and the mortuary. 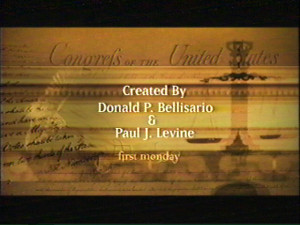 The coveted “Created By” credit. Even more coveted if the show succeeds, which “First Monday” didn’t

H.S.: Any truth to the rumor that you steered a nuclear submarine?

Paul: One of the perks on “JAG” was that the writers got to hang out with the U.S. Navy, without having to be in actual danger. One day, we flew from a naval base to an aircraft carrier. The landing was pretty cool. Another day, we spent on a Los Angeles class attack submarine. And yes, they let me steer it for about 30 seconds. No international incidents occurred as a result.

H.S.: Finally, thank you for sitting down with Author Interviews.  What’s in your future?

Paul: I read a lot of emails from readers. The ones who don’t point out typos are evenly divided between writing a new Lassiter or another in the Solomon vs. Lord series. If anyone out there has an idea, I’m open to it and can always be contacted through my website. And, living in Miami, I am still trying to make the perfect mojito.