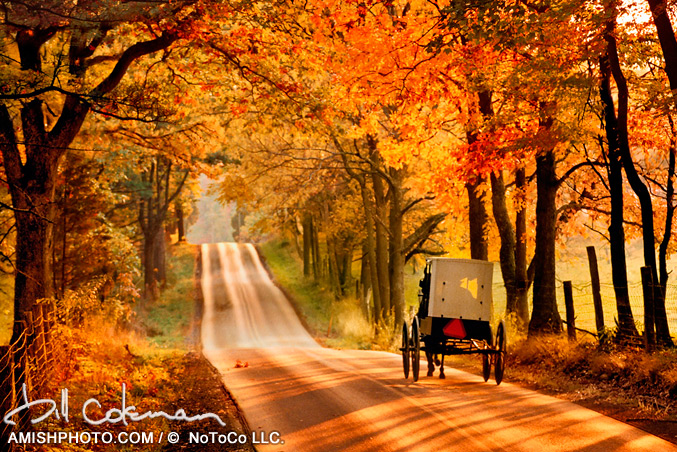 Unlike most of my posts, this is not about crime fiction or mysteries or legal thrillers.  There will not be a homicide, a kidnapping, or a murder trial.

This is about a photographer who loved autumn and loved children, and over many decades, formed bonds with strangers who ordinarily distrusted outsiders, the people they called “the English.”

Bill Coleman, a legendary photographer in Pennsylvania, died last week at 88.  He leaves behind family and friends and a treasure trove of photography.  Specifically, his legacy contains thousands of images of an Amish village and the people who inhabit it. As the obituary in the Centre Daily Times put it:

“He became known internationally for his Amish images: buggies on tree-shaded lanes, children playing in schoolyards, young men walking in a cluster down a road. Throughout his long and successful career, starting with his first State College studio in 1951, he strove to capture the essence of people — from the student and local resident portraits of his early years to the Amish and European scenes that defined his later work.”

I’ve known Bill for more than 30 years. In 1985, he snapped this photo of my son Mike and me on the Penn State campus.

One day after the photo was taken, Penn State would defeat Alabama 19-7 in football and go on to an undefeated regular season that would end with a heartbreaking loss to Oklahoma in the Orange Bowl.

But, just as this post is not about books, it’s also not about football or nostalgia or my family. It’s about a warm and generous and immensely talented man. His photography was truly art.

I own several of Bill’s Amish photographs, including this one from his “barn-raising” series.

Yes, the photo calls to mind the Harrison Ford movie, “Witness,”set in Pennsylvania’s Amish country. For an excellent synopsis of “Witness,” which was nominated for eight Academy Awards and won two, check out the Wikipedia article here.

I have many favorites among Bill’s photos. There’s this iconic shot of three barefoot Amish girls skipping along a dirt road.

Then there is the Amish village in the snow.

Perhaps Bill’s best known photograph is “Fall Splendor.” I never tire of looking at it. The photo provokes nostalgia and a yearning for simpler times.

I think Bill loved Autumn more than any other season. His photo of the hills ablaze with colors — and cows in the foreground — reminds me so much of my early years growing up in central Pennsylvania.

Most of all, Bill loved the kids. This photo is simply titled “Sharing.”

Bill even loved the rowdy kids, who might, on occasion, playfully shoot him the bird. Yes, even Amish kids!

You can check out all of Bill Coleman’s photography on his website, which is aptly titled, Amish Photos.

1 thought on “Photography: The Man who Loved Autumn and Children”