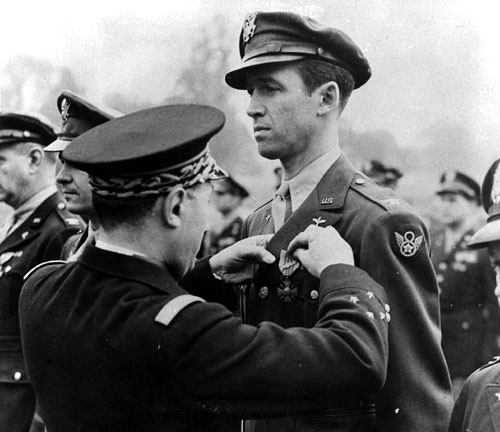 A friend just sent me the photo below, asking if I’d ever seen it. Well yes, the “technicolor” picture hangs on the walls of countless Hollywood agents, producers, and executives who seek some connection — real or imagined — with the golden age of films.

The photo was taken in early 1943 to celebrate MGM’s 20th birthday. Yes, that’s mogul Louie B. Mayer in the middle of the front row flanked by Katherine Hepburn and Greer Garson. You’ll find Lucille Ball in the front row, too, but her husband of three years, Desi Arnaz, is in the back row, middle, in uniform.

It won’t take long for you to find Red Skelton, Mickey Rooney, William Powell, Wallace Beery, Spencer Tracy, Walter Pidgeon, and Robert Taylor in the scond row. And a host of other stars.

Jimmy Stewart: A Hero Among Stars

To me, one star stands out. At the far left of the front row one is Jimmy Stewart. It’s hard to tell in the photo, but it would appear Stewart is wearing lieutenant’s bars. That would make sense. A Princeton University grad, he had virtually sneaked into the Army as a private in 1941, despite being underweight…five pounds less the required 148. Already an experienced pilot of small aircraft, he wanted to fly combat aircraft. What he didn’t want was to be an entertainer at the USO or to simply train other Army Air Force pilots in the States.

Jimmy Stewart, of Indiana, PA, became a lieutenant in July 1942 (before the photo was taken) and a captain in July 1943. He was stationed at Gowen Field, Boise, Idaho when MGM celebrated its 20th Anniversary with the party and photo. Gowen Field may also be where my father, Lt. Stanley Levine, of Hughesville, PA, met Stewart. Dad always claimed to have played poker with Jimmy Stewart when both men were lieutenants, and that’s about the only place I can put them together. Dad later served in the Pacific as a navigator on a B-29, while Stewart piloted B-24 Liberators over Germany from bases in England.

In December 1943, several months after the MGM photo, Stewart flew his first combat mission, bombing U-boat facilities in Kiel, Germany. A few days later, he took part on an attack on Bremen, followed by Ludwigshafen, and Berlin. In all, Stewart flew at least 20 combat missions. As far as I can tell, the only special privileges he received were rather rapid promotions, not highly unusual for World War II, but still a bit startling: private to colonel in four years. He was also highly decorated with two Distinguished Flying Crosses and the French Croix de Guerre.

In all, I have nothing but respect for Jimmy Stewart and his dedication to his country. This photo, showing Col. Stewart in his hometown of Indiana, PA, was taken in early September 1945, after the war ended. At the time, my father was still in a Japanese prison camp, waiting to be repatriated.

For as long as he lived, Stan Levine spoke highly of Jimmy Stewart and with disdain of John Wayne, who was a pretend hero in “Sands of Iwo Jima” and “The Green Berets” among other potboiler war movies. In real life, Wayne was content to let Republic Pictures seek deferment-after-deferment for him. In later years, he became a bellicose supporter of the War in Vietnam.

You can read more about Jimmy Stewart’s war record in Wikipedia here. On the 50th Anniversary of the Hiroshima bombing in 1995, I wrote about my father’s war experiences in The Miami Herald. My father, after all, had been in Hiroshima one week AFTER the nuclear blast. Not willingly, of course. The article, “Hiroshima Personally” is here. Six weeks after publication of the article, my father died. Two years later, Jimmy Stewart, who retired as a Brigadier General from the Air Force Reserve, also died.

When I hear “Taps” played, I think of them both.