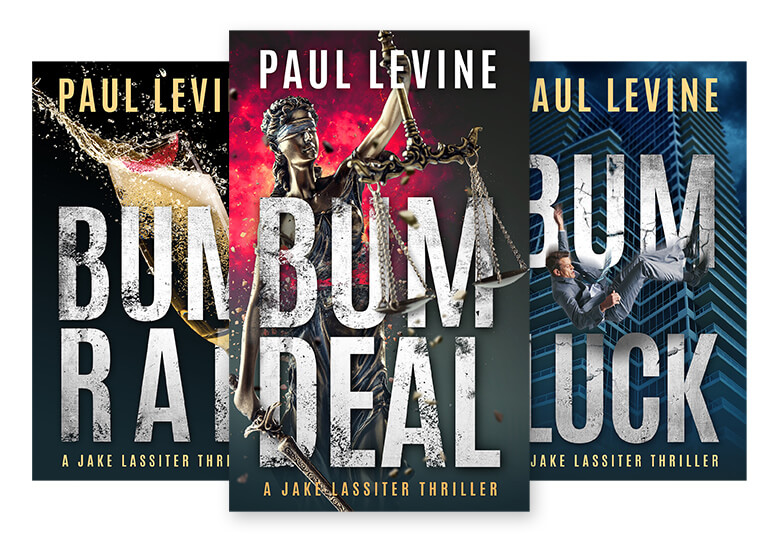 How did Jake Lassiter, the linebacker-turned-lawyer, get together with those squabbling law partners, Steve Solomon and Victoria Lord? I’m glad you asked. The answer can be found in “Bum Rap,” which opens with a bang. Literally. The first chapter consists of four paragraphs:

The gunshot hit Nicolai Gorev squarely between the eyes. His head snapped back, then whiplashed forward, and he toppled face-first onto his desk.

There were two other people in the office of Club Anastasia.

Nadia Delova, the best Bar Girl between Moscow and Miami, stared silently at Gorev, blood oozing from his ears. She had seen worse.

Steve Solomon, a South Beach lawyer with a shaky reputation, spoke over the echo still ringing off the walls. “I am in deep shit,” he said.

If there is a more dispiriting place in Miami than the county jail, I haven’t found it . . . and I’ve spent a lot of time at the morgue. Approaching the jail, you can hear the anguished shouts of inmates, yelling through the barred windows at their wives, girlfriends, and homies below. Inside, you’ve got that institutional smell, as if a harsh cleanser has been laced with urine. Buzzers blare and lights flash. Steel crashes against steel as doors bang shut with the finality of a coffin closing.

I found Solomon and Lord in the lawyer visitation room. Looking at my new customer – excuse me, client – I said, “First rule, Solomon. You have to tell me the truth.”

“No problem, counselor,” he replied. “Like I tell my clients, ‘Lie to your spouse, your priest, and the IRS, but always tell your lawyer the truth.’”

“Lie to your spouse?” Victoria gave him a pained look.

“Second rule,” I said. “Don’t leave anything out, no matter how embarrassing.”

“We’re on the same page, Lassiter. Now, why don’t I just tell you what happened?”

“Third rule,” I said, ignoring his request. “In trial, don’t lean over and whisper in my ear.”

“You’ll distract me. Plus I won’t be able to hear the testimony.”

“I had multiple concussions playing ball and I’ve got some hearing loss.”

Solomon turned to Victoria. “You brought me a deaf lawyer?”

“Plus I’m bone tired of clients who try to tell me what to do.”

“If you have a question you want me to ask on cross, just write a note on a legal pad in large block letters.”

“I’ll read your note and decide what to do.”

Solomon reached across the table, grabbed my pad and pen, and scribbled something. Then he shoved the pad back at me: “SCREW YOU, LASSITER!”

“Now, if we’re done with your rules,” he said, “I’ll speak loudly so you can hear and slowly so you can understand. What’s the chance you can get me bail?”

“It’s okay, hon. Been here lots of times for contempt.” He turned to me, grinning. “Does that shock you, Lassiter?”

“Not that you’ve been held in contempt. Only that you consider it a merit badge.”

Solomon looked as if he wanted to do to me what the state said he did to the Russian. “Lassiter, you have a remarkable ability not to inspire confidence in a client.”

I shrugged. “Why don’t you tell me your story and see if you can inspire my belief in your innocence?”

“Before I do, promise you won’t get on that white horse of yours and start making moral judgments.”

“Good. Because I remember when you were charged with killing your banker.”

Yet more proof, I thought, that our past clings to us like mud on rusty cleats. “Bum rap,” I said.

“So’s this!” Solomon wheeled toward Victoria, his dark eyes lighting up. “I get it now. You hired Lassiter because he’s been wrongfully charged, and you think he can relate to me in some band-of-brothers, soldiers-in-the-foxhole way.”

Victoria smiled. “I think you two have more in common than either of you may realize.”

“Doubt it,” my client and I said simultaneously.

“You both believe that the justice system is flawed,” Victoria said.

“The so-called justice system,” I added.

“The ex-jock is right,” Solomon said. “The system is riddled with human frailty.”

“I’m with you on this, Lassiter.” He sounded positively delighted. “Your job is to do everything you can to win, even if you have to break some dishes . . . or some ethical rules.”

“Only the small ones,” I said. “Now, tell me what happened at Club Anastasia.”

Solomon began by describing how a Russian bar-girl named Nadia Delova came to his office, asking for help in getting back pay from club owner Nicolai Gorev. Then he got to the juicy part.

“Bum Rap” is available in e-book, print, and audio formats. Oh, that reference to Lassiter being charged with killing his banker. That’s a short novel titled “State vs. Lassiter.” Because all the Lassiter novels are stand-alones, they can be enjoyed in any order.