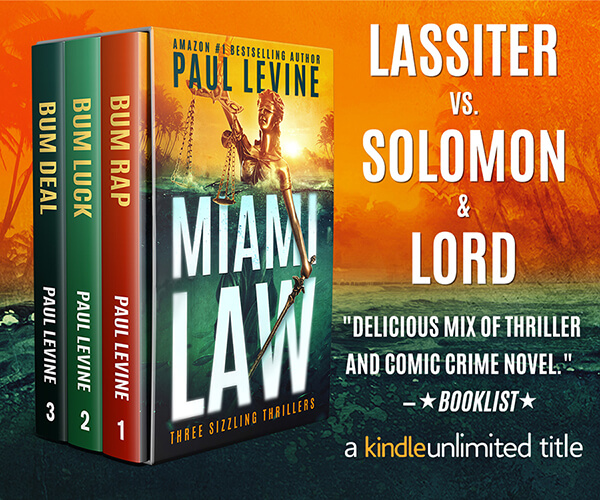 That’s the setup for my legal thriller, BUM RAP, which hit number one in the Kindle Store and lodged me briefly in the top spot of all authors on Amazon, just ahead of a promising fellow scribbler named Stephen King.

UPDATE:Two more novels bring Lassiter together with Solomon & Lord. They’re BUM LUCK and BUM DEAL, and all three are available together as MIAMI LAW.

BUM RAP gives readers a chance to see how Lassiter has developed over the years. In the past, despite all his grumbling about ungrateful clients and lousy judges, he remained an optimist:

Lassiter looks for loopholes in the Canons of Ethics:

That noted writer of legal thrillers, William Shakespeare, famously penned: “What’s past is prologue.” (I consider “The Merchant of Venice” one of the early legal thrillers. Talk about rough justice!)

BUM RAP is available in e-book, print, and audio, and all of the Lassiter legal thrillers can be found on Paul Levine’s AMAZON AUTHOR PAGE. Kindle Unlimited members read FREE. Just a few bucks for everyone else. Kindle Unlimited is now available in USA, UK, Canada, Mexico, India, Brazil, Germany, France, Spain, and Japan).